What is the derivation of the word 'loo'?

Forgive my ignorance but this is a question that perplexes me gravely and I can't think of anyone else I can safely ask without offending. Can you explain to me how the bathroom/restroom/lavatory/whatever you wish to call it came to be known as the loo?

This is a very interesting question, and experts have debated it for years. Some authorities maintain that, like many an English tradition, the word 'loo' commemorates the death of a great number of Frenchmen, and derives in fact from the Battle of Waterloo.

Upon that dreadful day, so many French soldiers soiled themselves with terror while going, 'Eek, eek, please spare us, mighty English conquerors,' that the battlefield resembled a shimmering lake of urine, with here and there a poignant turd bobbing along, a bathetic scatological relic of some poor man's mortal agony. A piteous sight! True, they were foreigners, and had delivered their souls into the hands of a militaristic tyrannical short-arse, but they were still men. Even Wellington, the Iron Duke himself, was moved, and commented, 'Oh, the horror. See how our garlic-chewing foe gush themselves with fright as they quail before the wrath of British cannon. Waterloo? The place more resembles a Water-Closet. Ha ha ha!' 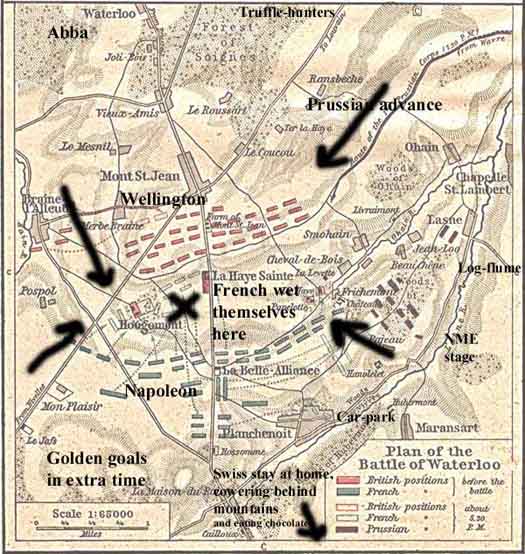 Sketch-map of the French disgrace at Waterloo

Hence, 'Waterloo' passed into currency as a euphemism for water-closet or toilet, as British soldiers would come home and say, 'Hey, you'll never guess what, all the froggies weed themselves and the guv'nor, quick as a flash, he goes, 'Waterloo? Water-Closet, more like, ha ha ha.' And their wives would go, 'Ooh, that's a good one, Bert, I must tell Marjory and the baker and old Mr. Smethurst from the corner, what has got only one leg, so he hasn't, nor nothing, arr.' (I am not padding this answer, by the way, just trying to paint the picture.) And as time went on Waterloo became shortened to 'loo by people in a hurry to get there.

Another possibility, however, is that the word 'loo' is an abbreviation of the word 'loony'. Among the English aristocracy in the 18th Century toilets were considered unmentionable. However, it was considered no shame to have an insane inbred relative imprisoned in your house. Thus, when a hostess was showing a guest around her mansion and they came to the toilet door, she would say, 'We don't go into that room, dear, that's where we keep the loony.' And at the dinner table a guest might rise and say, 'I would like to visit your loony,' or 'Excuse me, where is the loony?' While using the bathroom, the most well-groomed people would often hoot and gibber and make loud whooping noises, to cover any untoward splashing sounds and to maintain the polite fiction that they were 'playing with the loony'. (Voltaire, who was not clued-up to this part of the etiquette, wrote after a visit to a country seat: 'These English! How they carry on in the craphouse. I do not know what is wrong with their diet but they sound as if they are passing cannonballs.') The drawback to this euphemism was when a family really did have a loony in their house. Occasionally a guest would ask to be shown to the loony and find themselves in a small cell with a maniac clinging to the ceiling grinning at them. They were then faced with the dilemma of doing their business in the loony's straw while the loony watched and gurgled appreciatively, or returning to the drawing room and quietly wetting themselves.