How to deal with a Scottish Boss

Two American correspondents write that they are having problems with a very dour Scottish boss:

He has no sense of humor whatsoever, and any advice you can give would be greatly appreciated. Does the constant rain in Scotland sap the humanity out of people? We don't know any haggis jokes, I'm not asking him about undergarments for his kilt (too much information), and other than quoting from "Braveheart" and "Ivanhoe," we're stuck.

Does the constant rain in Scotland sap the humanity out of people?

In justice to my fellow Britons or north neighbours or whatever the hell they are these days, I should point out that there are at least three different types of Scotsman. The first is slightly wild and always up for a party. The second is debonair, cultured, brilliant and witty. Of the third, however, it can be said that the mist has entered into his soul. A dour, flinty-hearted, miserable Scottish minge-bag. It was this type that P.G. Wodehouse had in mind when he wrote, 'It has never been hard to tell the difference between a Scotsman with a grievance and a ray of sunshine.' Into this category falls my former boss Mr. McTaggart, the most evil man ever to deny an expense claim, and I suspect your boss as well, and also the British Chancellor of the Exchequer, Gordon Brown.

There are various theories as to what exactly makes this sort of Scot so embittered and joyless. Some indeed blame the weather and the unforgiving terrain, some the austere pieties of the Kirk, some the bagpipe music, an unholy dirge which curdles the souls of those weaned on it and forever squashes any possibility of happiness.

Personally, I blame British war films, and an actor named Gordon Jackson. In old British war movies there was always a token Scotsman, imaginatively named Jock, played by Gordon Jackson. He would be teamed up with either a chirpy Cockney wide-boy named Tommy or a dashing upper-class officer named Rupert Spencer-Fotheringay. While the feckless Englishman would laugh and booze and chase wenches with no thought for the morrow, cautious, thrifty mother's boy Gordon Jackson would abide by the King's Regulations, get an early night and save his pay, and dream modest dreams of slow, steady self-improvement. While Tommy would loot French bistros, Jock would talk about taking night-school classes after the war and making something of himself. While Rupert slurped champagne off barmaids, Gordon Jackson would shyly propose marriage to his sweetheart and indulge in touchingly humble plans for the future: 'Aye, Elsie, we'll have to scrimp and save, but we'll get by. One day we'll have our own wee hoose with a wee back yard, and maybe a rabbit in a hutch, aye, I've always fancied a rabbit. And maybe, one day, an indoor toilet in the hoose, for I'm that sick of shitting in the heather.' Of course, this being a war film, planning for the future is foolish and fatal, and by the final reel he has been killed by Germans while the happy-go-lucky Englishman gets by without a scratch. The cosmic unfairness of this rankles with many Scots and turns them sour. On some deep level, every thrifty Scotsman believes he will be punished for his thriftiness and work-ethic by being killed by Germans.

Try this experiment. The next time your dour Scottish boss does something particularly mean, stingy or overcautious, glance out of the window and say, 'My, how unusual, a Messerschmitt.' Something deep in his soul will respond and he will jump three feet and say, 'Och, I'm a goner, Tommy, Elsie, Elsie, the rabbits, why?' 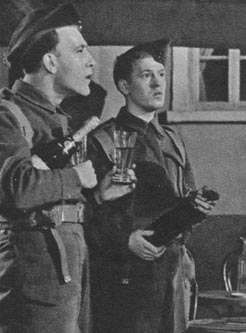 The primal scene of angst in the Scottish soul: while feckless Tommy (Tommy Trinder, L) prepares for a night of carefree carousing, poor doomed Jock (Gordon Jackson, R) nurses a hot water bottle and plans an evening thinking of Elsie and reading up on low-risk investment accounts. He will die like a dog.

How to deal with him

Well, I don't know any haggis jokes either, but I would say that's definitely the right track. I imagine they love that sort of thing. Say things like, 'Och, it's a bonny day, the noo.' Ask him if he's had his porridge. 'Och, have ye had your porridge, the noo?' Talk about shortbread and thistles and stuff. Ask him if he's seen the Loch Ness Monster. 'Och, have you seen Nessie, the noo?' Wear kilts and dance a highland fling whenever he comes into the office. He'll like that.

Ivanhoe and Braveheart is good, but don't neglect more up to date cultural stereotypes, like 'Trainspotting' or Scotty from Star Trek. Say things like, 'The engines cannae take it, Captain!' Or, 'Och, have you had your heroin, the noo?'

Mean, dour, granite-hearted, penny-pinching Scottish bosses love practical jokes. My favourite is to attach some money to a long thread and leave it on the floor near his door. As he goes to grab it with his gimlet eyes lighting up, yank it away from him. Make him chase it right round the office.

A simpler but equally effective trick is just to waste money in front of him. Light cigarettes with burning dollar bills, make yourselves paper hats or fetching novelty bracelets out of money, scribble notes on money and fling it across the room at people instead of e-mail. When he says something like, 'Och, have ye taken leave of your senses, the noo?' reply, 'It's only money.' Watch as he turns deep purple and collapses. Then watch as he slashes your wages.