Someone sent me a Lovefilm trial for Christmas, so I've been watching films, and it turns out that, while they don't compare to books, when you can get the good ones that don't get shown on the BBC any more, some of them are really OK.

This picture is in the stills gallery of the DVD of Bergman's The Magician. I've left it on my telly for the past four hours and every time I look at it I chuckle. 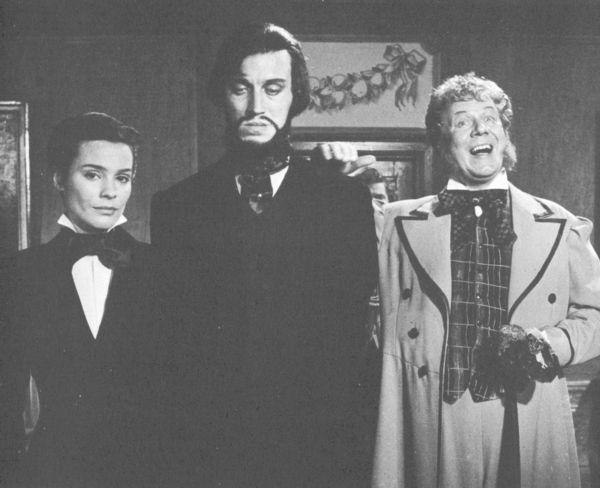 The film tells of a troupe of travelling artistes being investigated and humiliated by smug burgesses and is about the nature of the relationship between theatre folk and what a Python sketch once described as 'non-creative garbage with Tony Jacklin golf-clubs and bleeding Masonic handshakes.'

Max Von Sydow, in the centre, is the mute magician. The cheery chappy at the right is Ĺke Fridell as Tubal, the brash barker of the troupe. He is a rollicking unreflecting loudmouth who seems never to doubt he will get a warm welcome everywhere and never shuts his blasted yap for a second.

So you have to look at this picture as a moment of high psychodrama. Max Von Sydow is obviously the real, inner Bergman, listening in mute horror and self-loathing as crass showbiz huckster laughing-boy Bergman on the right pitches, say, The Seventh Seal as a boisterous comedy. 'Seals, right? Everyone loves seals!' Well, there probably wouldn't be the possible seal-seal confusion to exploit in Swedish, but he's saying things like, 'It has a knight! Prince Valiant did boffo box-office' and mentioning that it ends with a dance. Or he is playing up the nudity in The Silence, or saying that the beatnik hitch-hikers in Wild Strawberries will go over big with the kids. 'It's a road movie! Kerouac! Bob and Bing!'

Meanwhile real Bergman inwardly groans, 'Oh, that it should come to this; I no longer fear death.' Ingrid Thulin, at left, I think must represent the artist's pride or self-belief: the voice in the ear that whispers, 'Squares. Fuck 'em. You're worth ten of them. It will all be worth it in the end, darling, I promise.'

Sometimes she tells you you should burn the place down around their wretched ears. That can be scary. But she is basically right.