Dare I stoop to recycling my own Christmas cards for material? I think I have to. Over the holidays I got a mail from a friend - well, let's not be pushy, a cherished acquaintance - recounting the joys and woes of his year gone by. Among other things he is trying to publish, or in fact re-publish, a children's book he wrote, and he mentioned that he'd shown it to an agent and got the reply: 'Love it; do you know any celebrities that could say they wrote it?'

I should point out that my friend's book, out of print now, was well-loved and a big seller back in the 70s, and since establishing an online presence he's been bombarded by people who remember it asking how they can get hold of a copy; I should also say that he's someone who's very well connected in the art and lit world, as evidenced by the fact that he can get agents to reply to him in the first place, and he's someone who's successful in other fields - in fact, I would say, while not a celebrity by current standards, borderline famous himself.

...One had suspected that things had reached such a pass but it is indeed dispiriting to hear it spelled out so nakedly.

I imagine at some point you've come across a film set in the 1950s called 'The Front', starring Woody Allen as a semi-literate shnook who agrees to put his name on scripts penned by TV writers blacklisted by McCarthy? It seems that's what we need, a Front - some celebrity whom even the most facile ghostwriter can't get a book out of but who's starting to feel left out, who would be willing to lend his hallowed name not just to our works but to those of other lamentably fame-deficient talents. At random I nominate Bill Treacher, who used to play Arthur Fowler in EastEnders: 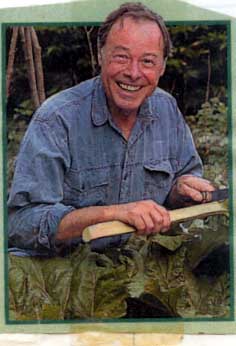 A search of Amazon reveals the astonishing and, for him, demeaning fact that he has written no books at all as yet - astonishing when you consider that, before picking him 'at random', I had searched Amazon for such people as Bobby Ball, Kevin Keegan, John Noakes and the man who provides the voice for Wallace in the Wallace and Gromit cartoons and found copious entries for all - indeed the only other celebrity by whom I could find no books in half an hour of fairly diligent searching was Anthea Redfern, the former 'give us a twirl' bird from the Generation Game - she would be my second choice; she would bring a dash of glamour but lacks Bill Treacher's gravitas. Furthermore a glance at his wikipedia entry assures me that before and after his stint on the soap his career has been quiet, apart from a guest slot on The Bill and an advert for the Austin Allegro in 1973, giving him time to have written all the books we want him to put his name to.

Imagine! Through the combined efforts of our good selves and a legion of other unpublished writers we could make Treacher acclaimed as the greatest genius of this or any other century. Without immodesty, his name on my works alone will raise eyebrows; when yours are added, jaws will drop with astonishment at the range of the man's talents; when I get him to front for my Peruvian friend, who is currently writing a 1000 page surrealist novel spanning the entire history of Europe of a brilliance and linguistic complexity to make Ulysses look like a children's primer, who will stand before him? And that is merely the beginning. Not a month will pass without some work of dazzling originality flowing from his pen. Soon the name of Treacher would be bracketed with Shakespeare and Dante; he would be feted by academia, garlanded by Stockholm, consulted by statesmen; give weighty pronouncements on current events, the destiny of mankind, the condition of the human spirit in the 21st Century; out of sheer adaptation he would acquire a solemn frown and a thousand-yard stare and move from his Suffolk allotment to a Paris garret where he would enjoy a prodigious intellectual and sexual life; eventually he would die, showered with all possible honours, grieved by millions, nations squabbling among themselves over the right to bury the mortal remains of this imperishable world-spirit... Old tapes of EastEnders would be exhumed that savants may pore over them for clues as to his inner life, for decades to come anyone remotely hip would never drive anything but an Austin Allegro... 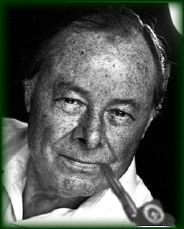 Treacher: 'We are all prisoners of life. Any attempt at communication is merely rattling the bars of our cages. Pauline.' 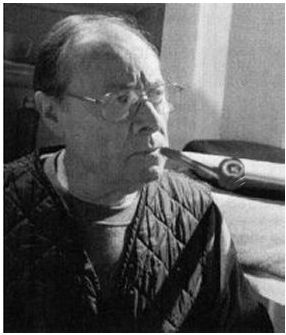 'Death does not frighten me. Ignorance frightens me. People named 'Butch' frighten me. The possibility that people will one day cease to laugh at the jokes in Kierkegaard frightens me. But I strive to be upbeat. The other week I saw the corpse of a suicide fished from the Seine. The tackle swung out of control and it knocked two Midwestern tourists off a bridge. That cheered me up all day.'