The Campaign to Free East Prussia

On my latest trip to America, every now and again I would spot stickers on automobiles reading, "Free Tibet!" Seeing such, I couldn't help but shed a tear at the fact that Americans were neglecting the plight of my own people. Us Prussians are a simple people with according desires: simple beer, gothic architecture and the occasional blood sacrifice. Yet still our nation was savagely taken by us by international conspirators as "war reparations" to Poland in a minor military conflict of no real significance. Hopefully someday, the plight of our humble people will be told.

I intend to tell it sir! I am outraged that this story has received so little international coverage! I shall not rest nor shall my sword sleep in its scabbard until justice is obtained for your people! 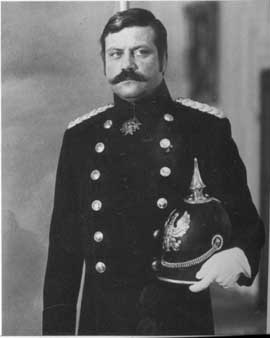 Karl August Schultz: the Dalai Lama of the Prussians

You are unlikely to find the Potsdam Conference of 1945 mentioned in any of the history books. Yet it was here, apparently, that the sinister cabal of the fascists Harry S. Truman, Winston Churchill and Josef Stalin foregathered in secret to carve up Europe between them. Here it was that East Prussia was so cavalierly handed over to the scheming Poles. And yet Germany had no say in the matter. And why? Because the German leader had recently been found dead in mysterious circumstances, the victim of an apparent 'suicide' - or so it was claimed, for his body has never been produced.

Who speaks for the Prussians?

Michael Kelly's Page of Misery is proud to inaugurate the Campaign To Liberate East Prussia. For too long this plucky little country has been crushed beneath the heel of the tyrannical Poles. The Prussian culture has been erased and places with relatively sensible German names are now called things like 'Czczczczwicz' or 'Pizzpot'. The few Prussians remaining in the occupied territory are humbled and downtrodden and forced to eat inferior Polish sausage. Their pretty native costume of black shirts and jackboots is now no longer to be seen. 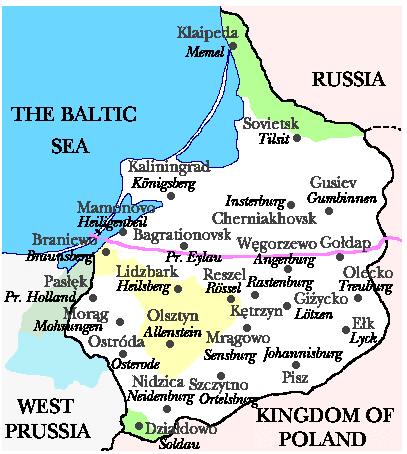 The once proud towns of East Prussia, now groaning beneath
the Polish heel and given degrading names like 'Elk', 'Morag'
and 'Pisz'.

What Can YOU Do To Help?

Protest vigorously and often. Here are some useful addresses:

Write to the UN to protest the Polish occupation of East Prussia:

Or write directly to the government of Libya, who are chairing the UN's Human Rights Commission this year. Colonel Gadaffi knows what it's like to be misunderstood and he may give the Prussians a fair hearing.

Sirs,
I urge you to consider Karl August Schultz, patriot and saint in human form, the Simon Bolivar of the Prussians, for the Nobel Peace Prize for his work in bringing the plight of the East Prussian people to the attention of the world. Although provoked beyond measure he has not yet killed anyone to the best of my knowledge.
Signed,
[Your name, or better, the name of someone eminent and trustworthy, e.g. Neil Armstrong]

A self-confessed Pole, the Holy Father has never spoken out on the East Prussian issue. Indeed, he is almost certainly a leading figure in the international Polack media conspiracy that has kept this outrage hidden.

Write thusly to the Pope:

The Weakest Link
Fifteen to One

Appearing on a quiz show is a good way to obtain publicity for the cause. Act casually during auditions lest the Polish media conspiracy gets suspicious. If you get to appear on an actual programme, though, no matter what question you are asked, reply, calmly but firmly, 'Eastern Prussia will rise again.'

Beyond all that you can boycott Polish businesses and donate the money saved to me here. If you can help the campaign in any other way please contact me.

One day, let us hope, the towns of East Prussia will once again ring with the sound of polite heel-clicking and the happy traditional calls of 'Bitte', 'You permit?' and 'If the one who did this does not own up I will shoot you all.'

Already people all over the world are mobilizing against the Polish oppressors.

A Song for Prussia

Todd from California has composed this Freedom Song for Prussia:

It is a thing of crapness but his heart is in the right place.
I am hoping to organize a Concert for Prussia. If you are a member or the manager of a band, no matter how talentless, or if you have written a song or poem about the occupation of Prussia, please get in touch.

My call for a boycott on Polish exports is already being heeded.

Dave G. from Canada writes: 'My girlfriend took me to an art-house cinema to watch a Krzysztof Kieslowski film called "Decalogue". It deals with the problems of morality in an amoral world and is ten hours long.'

'As soon as I found out Kieslowski is Polish I was outraged and decided to boycott. Actually, I fell asleep, but I would have walked out if I hadn't.'

You make me proud, sir.

Karl August Schultz, the Garibaldi of the Prussians, has contacted me to express how moved and encouraged he is by our campaign. He it was who designed the stirring 'Free Prussia' emblem at the top of the page. He wishes it to be known that this graphic is available as a bumper sticker, T-shirt, or infant's bib.

Another Song for Prussia

Someone calling themselves 'The Notorious M.O.I.' has penned the following Freedom Rap:

Yo, Mutha Prussia
I'm backing yo ass
I'm down wit you, mutha
Those devilz be wak

While I appreciate your efforts the campaign condones neither violence nor bad spelling. Please ask a grown-up for help next time.

More on the Conspiracy!

A Mr. Martin Bormann writes from Paraguay to point out that the East Prussian province ceded to Poland was only a fraction of the land stolen from Germany by the international conspiracy. He sends the following map of German territory circa 1941 to illustrate: 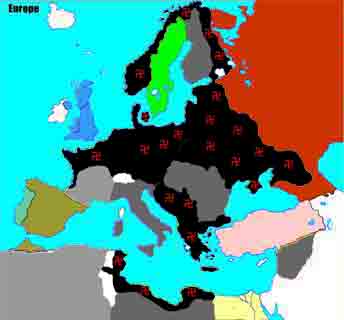 This is outrageous! Why isn't this taught in schools? Look how much those French bastards grabbed.

However, I don't know if this falls within the remit of our campaign. Herr Schultz is a Prussian patriot and I am not sure how far he is interested in justice for Germany as a whole. He describes Bavarians as 'inbred mountain people' and Austrians as irredeemable degenerates. Without clarification I am reluctant to widen the scope of the protests.

Jake from Sydney has smashed up a barber's pole as a symbolic gesture.

'Would it be possible to obtain funds for my legal defence?'

This Campaign is Doomed

Gareth from the City of London writes that he was thinking of buying a Skoda but to protest the Polish occupation is now going to purchase a Porsche.

Your sacrifice makes me proud. I think Skodas are Czech, but never mind.

I have just had an interesting mail from a Professor of Modern European history. In light of new information this campaign is discontinued.


--
PS. I've been told that someone ripped this off to write a sledgehammer satire. It could be coincidence. Either way it was here six months before.