[Edit, 2013: I repent this now, in fact I would pretty much like to forget I wrote it. It has moments of inspiration but it also has moments of the most appalling playground crassness. I would still maintain the things I was parodying are worse, but it crosses lines, sometimes with purpose but sometimes gratuitously, and what was bracing in the original five-page bit becomes wearing stretched to 300. Also, I wanted it to be more than a rag-bag of sick jokes, so it's a rag-bag of sick jokes that develops delusions of grandeur.

If you want to buy a book out of gratitude for the things I've put on the site, and you don't fancy the Ulrich Haarburste one, I strongly suggest you get my newest, which is a hundred times better.]


[Edit to the edit: some people have told me I'm being a bit hard on this one. I suppose it does have its moments, and energy and a high gag-rate at least. But if you've read and enjoyed 'Clara and Miles' - be warned this is only a fraction as good and is very, very bad taste at times.]

Another book is out

I have another book out, brought out with a proper publisher this time, so it will be in all the shops and have a pretty picture on the cover. (Actually a hideous picture as you can see). 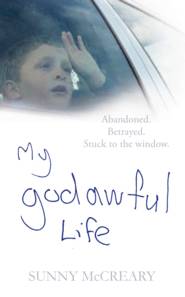 It is 'My Godawful Life' by Sunny McCreary (in character again), based on this. Paperback, 300-odd pages, seven quid, blah blah. A parody of the 'Misery Lit'/'Painful Lives' genre, it is by its nature very sick and tasteless in places. There are also all kinds of silly jokes, and snarling satires of various other things that have annoyed me lately, but basically if you didn't like my original 'Godawful Life' bit you won't like this, as it's like that only worse, in fact downright evil at times. Oh and there's a lot of gratuitous (if artistically justified) swearing in certain passages.

It is available from Amazon and other online sellers. Of course the really ethical thing would be to buy it from your friendly neighbourhood bookshop. If they don't stock it, please burn them down. But they should do, it's coming out with Pan Macmillan and will be everywhere, everywhere. (Well, most places, I hope. If it isn't in stock in your local shop you can of course ask them to order it for you.)

I'm trying to verify but I think it'll also be in shops in Australia, New Zealand and Canada, watch this space for details. There may also be a US edition at some point but that isn't settled yet.


Update -
It will be available in Australia, New Zealand, Canada, Ireland, India and Singapore but you're less likely to find it in shops than you would be in Britain and your best chance may be to order it from one. No American edition yet.


Further update -
Looks like no newspaper reviews, so if you read it and like it please spread the word.


Once you have read it, please come straight back here to read the deleted scene.


Now go away and buy my book.

Another interview with Sunny I conducted for Publishing News

Interview with Moi about My Godawful Life for Unlikely Stories