This is from the business section of last Sunday's Telegraph:

Lieutenant-General Mikhail Kalashnikov - yes, the designer of the world famous AK-47 rifle - is an old man in a haring hurry to milk the brand power of his own moniker. So it’s a big British hello to Kalashnikov Vodka. “Good weapons and good vodka are twin brothers,” the 84-year-old honorary chairman of the Kalashnikov Joint Stock Vodka Company tells us... the chap with the bottle to hunt him down is a British entrepreneur, John C Florey. “It took me two years to find him,” says Florey... "When we did meet I told him: ‘You’ve got one of the strongest brand names in the world.’ He just said: ‘I know.’" 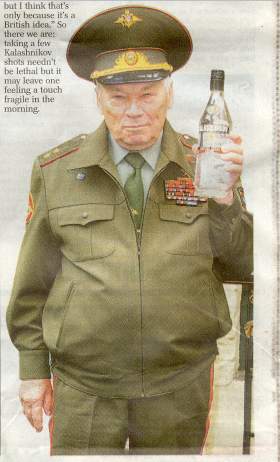 My first reaction on reading this was, genius. Genius. There's a man who deserves to become rich. I'm somewhat impoverished at present and given to fantasizing about having vast pots of money, hence I was reading the financial pages in the first place, because they're sheer pornography to me when I'm in that mood. And I still think it's genius and wish I could think of something like that. And as for Kalashnikov, he's worth a million pounds of business right there. He looks exactly like General Kalashnikov should look. He looks like Colonel Stok out of the Len Deighton books or something. You can picture him in a dacha talking about fighting Panzers on frozen rivers. 'Da, English, old General Winter was the enemy of us all... I lost three toes to him when my own frozen breath dropped on them and sheared them clean off... you and I, English, are the simple footsoldiers of history... ours not to reason why as your Tennyson says, nyet?... Here, we share a wodka before I shoot you in the bollocks...'

And, you know, I can definitely see the cool. I can picture myself ordering a double Kalashnikov on the rocks and thinking well of myself for it. In some weird alternate universe where I work in an advertising agency and have friends called things like Toby and Josh, perhaps, but I can picture it nonetheless.

Still - this is an unusual sort of a world, is it not? I mean, what exactly are they selling here? How did the Kalashnikov 'brand' become so strong and exploitable? The more traditional Kalashnikov-brand products may be masterpieces of design and engineering, but, well - I feel gauche for mentioning it, but they're used to shoot people. And while shooting people isn't always a bad thing, and Kalashnikov invented his 'brand leader' to shoot Nazis with, at the moment they're largely being used by some rather retrograde types to shoot at Allied soldiers, or by ghetto drug-dealers to shoot at each other. And although I don't imagine they'll be stressing those associations in the advertising - although personally I'd find it hard to resist slogans like 'Get slaughtered with a Kalashnikov' - that's how come they have this built-in product recognition, because that sort of thing tends to get mentioned in the news.

In fact it's what they call vertical integration, I suppose, because the news always makes me want to get drunk anyway. And now people will be able to watch the news and play drinking games. Do a shot of Kalashnikov every time someone gets shot with a Kalashnikov.

I really don't feel censorious. Mr. Florey is an inspired entrepreneur, and General Kalashnikov is this cool-looking gnarled old man who fought the Nazis and invented a gun to defend his homeland against them, and now he'd like his name to be known for something else besides - he has said, quite poignantly, that he wished he had invented a lawnmower instead - and you can see it as a swords-into-ploughshares thing, and I genuinely do hope they both do well out of it. I'm just somewhat bemused at the fact that the world is such that it undoubtedly is a good idea.

I mean, how far are we going to go with this? This postmodern recycling and decontextualising and recontextualising and what have you? Is there nothing at all that can't be a brand or logo or icon or an advertising gimmick? Is there really no such thing as bad publicity any more? ...Oh, who cares? Enough feeble pontificating. I don't want to be poor all my life, so I've decided to join in. In truth, I'm excited by the possibilities.

Naturally one's thoughts turn firstly to creating spin-offs for other arms manufacturers with a comparable profile to Kalashnikov - Glock pagers, Uzi tennis-ball-firing machines, Tomahawk Cruise vibrators. Cluster-Bomb brand laxatives. 'Have you Cluster-Bombed your toilet this morning?' 'Cluster Bomb, you'll still be going off five years later.' But that's only the beginning. The reputation for precision engineering and military efficiency isn't the point; it certainly has bob-all to do with vodka. All that's required is a name grown familiar from the daily media, something to provide free advertisement in every newspaper and TV bulletin, a word or a term dinned into everyone's brains daily, no matter how distressing the context.

For example, the Toyota Mujahadeen pick-up has long been overdue. The much-heard term 'Insurgent' would, I suggest, make an excellent name for a brand of condoms. Similarly 'Shock And Awe' would have made a nice name for novelty condoms, or a line of padded underpants; but the moment may have passed. Al-Qaeda could become the name of one of those companies that offers Networking Solutions, whatever they are. WMD - a clothing range, perhaps. Or in Britain, a pizza chain that promises to deliver in 45 minutes. 'Yellowcake' - a soap, or one of those things you hang in the toilet, or alternatively a really horrendous fizzy sweet for kiddies; they wouldn't know where the term came from, but they would pick it up subliminally and know it was something bad, and rush to buy it.

Similarly there must be some use for the SarinTM brand name. Insect spray? Weed-killer? Perhaps a toilet cleaner or kitchen disinfectant. 'One drop in the water is enough to wipe out a million germs.'

To have an SM club or pet obedience school named after Abu Ghraib might be crossing the line. On the other hand I think it would be an excellent name for a fruity cocktail drink. 'Abu Ghraib. Explore the dark side.' Or, 'Abu Ghraib. Let yourself off the leash.' Fallujah I can't think of a use for, except perhaps as the name of a new party game like Yahtzee or Jenga, at the climax of which everyone would cry out, 'Aiiii, Fallujah!'

Leaving aside war there are plenty of other current world problems providing dozens of other equally recognisable potential brand names just there for the taking. Look at health concerns, for example. With all the emphasis on viral campaigns it would only make sense to start an advertising agency called MRSA. 'No resistance... no immunity... make huge festering holes in the competition's flesh.' Sticking with viruses, Ebola would be a great name for a perfume. 'Ebola. Knock them dead.'

As for other medical problems, Bulimia is almost certainly already the name of a nightclub or a very trendy post-modern restaurant. Anorexia would make an excellent name for a line of very slender and compact mobile phones and mini disc-players and so forth. Herpes? A mobile phone network. The ads can play around with words like 'communicability' and slogans like 'If you don't get Herpes on your mouth you'll just get sore.'

What else gets in the news? How about Paedophilia? Paedophilia's a bit last year but it probably still has a fairly high recognition factor. I think you could have an up-market shoe-shop called Pedophile. Or perhaps a Scandinavian travel agency called Swedophilia.

Likewise date-rape isn't getting that much play just at the moment but still enjoys an enviable media profile. A luxury diary or highly efficient computerised personal organiser called the Date-Raper would be crass. Rohypnol Aftershave, however, is a surefire winner. It wouldn't include any of the active ingredients of the date-rape drug, you understand, but the advertising would imply pretty strongly that it would would render the opposite sex similarly pliant and unresisting and drooling.

Drugs in general are perennially newsworthy and eminently brandable. Ritalin hairspray or styling gel could be marketed with the slogan 'Make them pay attention.' Whatever that drug was that Oliver Sachs used in 'Awakenings' should be on a range of alarm clocks or at the very least energising shower-gels. Viagra should diversify into steel-erecting companies. Bigger opportunities, though, come from illegal drugs. Heroin and Crack and so on have not only strong brand names but a proven record in consumer loyalty and repeat business. And in an Olympic year banned steroids, with their built-in endorsements from prominent stars of track and field, should have huge branding potential; obviously running shoes are the first thought, although I suppose they'd have to be quite long ones to fit words like 'Tetrahydrogestrinone' and 'Methandrostenolone' on the side.

Finally, pictures of the Prime Minister's manically smiling face and positively bouncy demeanour as he left hospital after his operation would make a perfect springboard for the launch of a topical cocktail, the Heart Bypass. Give me a triple Bypass with an Arrythmia chaser. The Chancellor would like a Kalashnikov. Any kind.