(The following was commissioned by a proposed new British magazine which unfortunately folded before publication. I was asked to write a thousand words describing a week in my life, to be called 'A Letter From...' wherever. On the same page would be 'A Letter From New York' and 'A Letter From Kosovo.' Since there was no way a real description of a week in my life could possibly compete with the exciting tales of night-clubbing and ethnic violence I imagined the other two contributors would send, I decided to lie. Spectacularly. Non-British readers won't get many of the references. E.g., Wigan is a small and unglamorous provincial town. Before my legions of adoring teenage groupies start hopping on planes, I should point out it's not really where I live.)


It's 3a.m. in the Neon Chrysanthemum Cyberbar on Market Street and a Russian prostitute named Octobriana is stealing my sushi and asking me to admire her implants. Obligingly, I look down.
"Not those, marrer," she says with a fetching giggle, "my ears."
Then I see. What I had taken to be a side-effect of the unbuffered methamphetamine Lenny Tchitchikoff sold me half an hour before turns out to be the truth. Her ears are vibrating.
"Like them?" Laughing delightedly, she leans in close and brushes my cheek with an oscillating lug. The hairs of the back of my neck stand on end. "Nanotech, the best. A Turkman in the market did them."
I nod distractedly and take a swig of Sapporo, my cheek still tingling. Those little buggers must be vibrating at 500 kilohertz. They must have cost a fortune but they're a good investment. Japanese businessmen can't get enough of furu hasu, literally 'trembling-lotus' or high-speed ear-frotting.
"Impressive," I say.
"That's nothing. You should see them on full sweep." She presses each lobe and all of a sudden the ears are no longer oscillating but flapping like bat-wings, fanning me with a cool breeze. "Watch this." She picks up a piece of my fugu and tosses it at the right side of her head. The swinging ear connects perfectly and bats the morsel clear across the room, right to the corner table where a group of Yakuza are watching rugby on a plasma-screen TV. It lands with a soft plop in the pint of Worthington Mild in front of the largest of them. Chairs are pushed back and nunchuks drawn.
Octobriana giggles and sashays over to them, ears whirring, confident she can cool the situation. I'm already out of there. Outside, Market Street is a raw neon wound outraging the night sky. Food vendors, street jugglers and a dancing bear compete for pavement space. A ringletted fourteen-year-old tries to usher me into a Klezmer Klub and the man who claims to be the rightful king of Sweden asks me if I want to see two girls with a sasquatch. The night is just beginning.

Tell people you live in Wigan and chances are they'll laugh, but since moving here from Milan three years ago I re-learn daily that it's the most go-ahead city in the western world.
George Orwell wouldn't recognize the place any more but William Gibson might. The city's renaissance over the past five years or so is due in large part to the influx of the two main immigrant groups, the Russians and the Japanese. Wigan's Little Odessa community, the largest in Britain, is almost ten years old now, drawn here thanks to Orwell and The Road To Wigan Pier, mandatory reading in the last generation of Soviet schools, making it one of the few English places they felt familiar with. The Japanese came here partly due to Mitsubishi's establishing a hi-tech research division on the outskirts of town, and partly because of another George, Formby. Formbi-san is revered as a sensei by the Japanese, his films and songs pored over for their teachings of Buddhist acceptance, the scenes of his youth sites of pilgrimage.
Here you can find Kabuki theatre or balalaika thrash without even trying. Thanks to all the cutting-edge tech floating around the Mitsu campus, Wigan is also a centre for illicit bionics and no-questions-asked organ surgery. If you need a brain-graft in a hurry or you fancy a second penis, this is the place to come.
Older residents are understandably unnerved by the decadence that accompanies the town's newfound vibrancy. Questions have been asked about the desirability of having comfort-girls plying the Leeds-Liverpool canal in gondolas, wiggling their ears coyly at passersby.

Thursday. I'm several hundred feet underground at the bottom of the Bickershaw Colliery, now a gay disco. Much as when Orwell was here, the place is full of naked muscular men wearing helmets and grunting with exertion, although for a very different reason. 'The coalface' is the name of a dark back room where intimate things happen without much in the way of introduction or preamble.
Today, though, the place is host to the opening of the Wigan PoMo Art Festival, fast becoming the most important exhibition of conceptual and avant-garde art in the world. Alderman Joe Ogden, machiavellian big cheese of the Borough Council, is here in his robes and chains of office to unveil a new installation by the Audrey Roberts Collective, a trio of East European subversives who for reasons best known to themselves dress as and take the name of the Coronation Street character.
Ogden glad-hands his way through the crowd, smiles for the cameras, and boisterously slaps visitors from the sponsoring Mitsubishi corporation on the back. (This invasion of their personal space causes great loss of face to the Japanese and means they must now go home and ritually disembowel themselves. For this reason only low-ranking and incompetent employees are allowed near Ogden, who is known as gochiso sama deshita, the Smiling Hand of Death.)
A former fishmonger and canny political operator, Ogden has presided over Wigan's transformation from dreary northern market-town to hippest spot in Europe with a mixture of ingenuous bemusement and calculating opportunism. He pauses in the act of pulling the rope to unveil the new work. In previous years he has been confronted with foetus sculptures, punctured sex-dolls, a cornflake nailed to the wall. The trick is to just keep smiling.
The curtains part, revealing a man dressed as a clown wearing hobnail boots. Looking relieved, Ogden applauds politely and turns to grin for the cameras. The clown kicks him in the backside and sends him sprawling.
"I will buy it," calls Mr. Tenaka, the head honcho of the Japanese. Clown Kicking Councillor Ogden In The Backside is duly sold to the Mitsubishi corporation for Ł200,000 and the clown boots Ogden on his way to be installed in the corporate headquarters in Tokyo.
I go out to buy a beer and look for Octobriana. Wigan's week beats London's year. 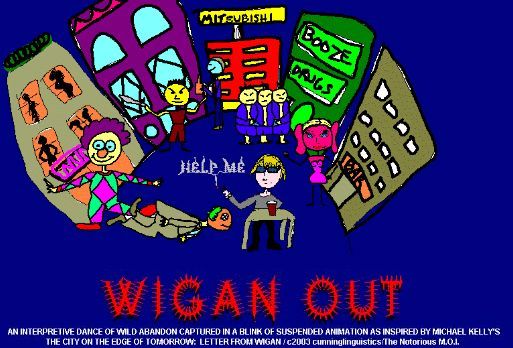