The free world heaves a sigh of relief as the American President survives his tussle with a snack food. What next? 'Bush pokes own eye out brushing teeth'? 'Bush fractures collarbone opening bag of peanuts'?

But anyone who thinks this is something to snigger about can go and stand at the back of the class. Behind this deceptively innocent, even heartwarming tale of triumph over adversity lies a human tragedy.

Frankly, I don't buy the pretzel story for a second. Think about it. If you were U.S. President and you managed to suffocate yourself to unconsciousness eating a pretzel, would you admit it? In this day of spin and style over substance, would you just come out and tell everyone about it?

There were no witnesses to the mishap. He was supposedly alone in the room. If it had been me in that situation, I wouldn't have told a soul about it. If there had been witnesses, I would have had them killed. Without a thought. Even if an aide came in and saved me with the Heimlich manouevre, I would have grabbed a gun and shot him like a dog. 'Sir...I saved your life...please, my children...' 'Sorry, kid, can't risk being known as the Pretzel President. It's wartime, can't give comfort to the enemy. The nation appreciates your loyal service and noble sacrifice, and try not to bleed on the carpet...Hello? Security? Jones just went mad, he hit me and raved about Allah and called me an infidel pig, I had to kill him.'

Really, why was there no cover-up? Couldn't they have thought of a better way to account for the bruises? 'President tackles armed intruder.' 'President foils assassins with bare fists.' How hard could it be to mess the place up a bit and stick an al-Qaeda corpse in there? Since when did politicians start telling the truth?

But the pretzel story is not the truth. The fact is, the pretzel story is the cover story, a genius piece of misdirection, a story so unlikely and personally embarrassing no-one would ever suspect it of being a fabrication. The real truth, which I have just realized and which sickens me to the core, is far more sinister.

The truth is, the leader of the free world is a battered husband.

Any doctor will tell you that the victims of domestic abuse are prone to evasions. 'I walked into a door.' 'I suffocated on a pretzel, passed out and slammed my head on the table.' It's textbook stuff. Remember that so-called boil? A contusion. His verbal lapses? The poor bastard is punch-drunk. George W. Bush is having the crap beaten out of him by his wife.

It is heartbreaking. Out of some misplaced sense of Texan gallantry, the man is shielding the two-fisted hellcat he married in an evil hour by assuming the persona of a bumbling klutz. 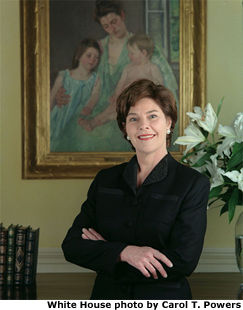 In retrospect, the signs were there from the beginning. Teacher. Librarian. Lists her favourite book as The Brothers Karamazov - a weighty tome, the hardback version of which, when applied brutally to the back of the skull, could easily render her husband dazed and knee-walking without leaving any tell-tale bruises.

She has been very eloquent on the rights of Afghan women. But what of the rights of husbands not to have their heads kicked in by a psychotic harpy?

In these dark times no-one wants to face the probability that America's first lady, her face contorted into a snarling mask of rage, is daily pounding her husband to hamburger with a set of brass knuckles. But if we stay silent, we are complicit in George Bush's degradation. 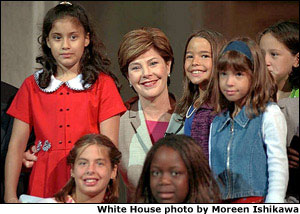 Laura Bush fomenting a sinister fem-dom Amazon army by encouraging
young girls of all races to beat their future husbands? We may never know